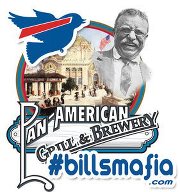 Join us the day before the Tweet Up Tailgate at Pan-American Grill at the Hotel Lafayette in Downtown Buffalo late Saturday afternoon (3-7pm) as we get ready to take on the New England Patriots the next day!

1. We’ll have some EXCLUSIVE hats and shirts for sale ONLY at this event (see below).

2. Last year’s home game vs the Patriots will be shown on the screens around the bar and we’ll celebrate the Bills victory all over again.

3. Typical “Buffalo fare” appetizers will be provided at no cost.

4. 10% of all bar proceeds will go to benefit Roswell Park.

5. Get a sneak peak at some of the merchandise available at Sunday’s Chinese auction.

7. What better way to spend a Saturday than with fellow #BillsMafia?

Can’t make it out on Saturday? We BETTER see you on Sunday at the Tweet Up in Hammer’s Lot!

For those who’ve been asking, we have all kinds of shirts at Billsmafia.com/store — but this royal blue one is an exception.

The hat is for this event only. We *may* look into doing more in the future, but they won’t be exactly like this one.

The owner of the venue we’re holding this party in was gracious enough to assist us in procuring these…. which is why they’re exclusive to the event.

This site uses Akismet to reduce spam. Learn how your comment data is processed.