A movement created by the fans and embraced by the players. Join the family.

So here’s how it all began.

Back in November 2010, Stevie Johnson dropped a pass. It was kind of a big deal, and he knew it. He dealt with it in his own way, as everyone remembers. We all felt for him, we knew he was going through a lot. Come on, they talked about his tweet on The View… The View.

As all the commotion started to die down early the next evening, Adam Schefter of ESPN suddenly retweeted Stevie’s now infamous “God” tweet. In Twitter time, that’s equivalent to about a week. Needless to say, we Bills fans pounced on Schefter, asking him “why would you do that?” “what’s a matter with you?” etc.

After all, we all know that no one circles the wagons quite like us.

Let’s give credit where credit’s due. Bre came up with a funny hashtag on Twitter called “#SchefterBreakingNews” very shortly after. He started tweeting old historical events and then adding “#SchefterBreakingNews” after them. Ryan, Rhyan, and Del quickly jumped onboard because, well, it was funny. Putting out tweets from the 1800’s and earlier can get addicting as you try to outdo each other.

Honestly, it was all in good fun but yeah… we were kind of getting back at him for dredging up Stevie’s tweet.

Well needless to say within a day or two the four of us got blocked. Leslie was lol’ing it up with us through the whole thing though I don’t think we ever got her to actually tweet with the hashtag… Maybe just once she did. :)

So fast forward a few Fridays. On a random Follow Friday I (Del) recommended Bre, Ryan, Rhyan, and Leslie using the hashtag of #BillsMafia — since we were “bad guys” in the eyes of Adam Schefter (although I don’t think he ever blocked @leslieanne94…. just saying). ;) She DID however tweet Adam several times, pleading our case, so make no mistake she is an OG just like us.

The Follow Friday joke got a bunch of laughs so we kept using it every week, even adding a few honorary members… until Spring 2011 when Bre came up with #TeamBillsMafia, opening it up to all Bills fans.

So that took off and died down, just like everything on Twitter, until Sunday, July 31st when @MufasasHair (Nick Barnett’s alter ego on Twitter) saw a #BillsMafia tweet and said “<< I like that lol“. Well after that everything just BLEW UP. Buffalo was already pumped after trending #BarnettToBuffalo all weekend. We wanted and got our man at LB for our defense.

From that point on, #BillsMafia became a movement and has become more exciting each day as other Bills players, both then-current (Aaron Williams, Fred Jackson, Andy Levitre) and legendary (Andre Reed) to name a few started using it in their tweets and in some cases adding the #BillsMafia profile pic overlay (see here for more information).

So I created a logo and registered this domain. We’ve created a store where you can purchase official merchandise that helps support Roswell Park Comprehensive Cancer Center and other charities in Buffalo, NY.

What it comes down to is, this entire endeavor is about unifying Bills fans across Twitter, Facebook, and the world. As @mgwebs so elegantly put it, #BillsMafia “… alludes to a society of people united for a single purpose who will be ruthless in reaching that goal”

On Twitter, Nick Barnett even showed off a custom mouthguard he made! How cool is that?! #BillsMafia is taking over. 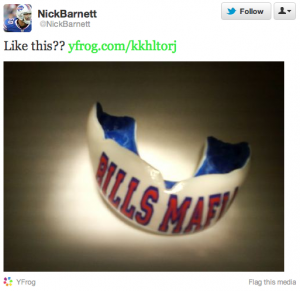 So that’s the history of #BillsMafia. Where’s it going? Who knows. The sky’s the limit. But one thing is for sure:

For those interested, here’s a blog post from September 10th, 2012, further addressing what #BillsMafia is… or at least should be.