The Buffalo Bills begin their training camp in just a few weeks, which means that the start of the 2015 NFL Season is around the corner. That means it’s time to start preparing for your fantasy football drafts! After an offseason that saw the Bills make several big-time acquisitions, there are several players on the team that could potentially be core players to take your roster to the championship. The team hasn’t had a player that could carry a fantasy roster to the Promised Land since C.J. Spiller’s 2012 campaign, but that could change in 2015.

Here at BillsMafia.com, I took a look at the roster from top to bottom in order to identify which players you should and shouldn’t be targeting in your upcoming draft. From PPR (Points-per-reception) to standard scoring leagues, this primer give you an idea of who to take, and where, from the 2015 Buffalo Bills’ roster. 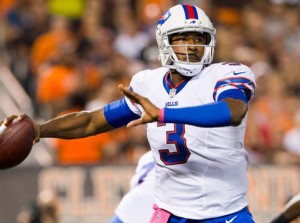 The Bills are currently without a clear-cut starting signal caller for the 2015 season, as EJ Manuel, Tyrod Taylor and Matt Cassel are in an open competition for the starting job. New offensive coordinator Greg Roman shares Rex Ryan’s “run-first” mentality, as his quarterbacks averaged just 445 pass attempts during his four seasons with the San Francisco 49ers.

Due to the lack of talent, coupled with the lack of volume and opportunity that the Bills quarterback will have to put up significant points, it’s probably best to find your passer elsewhere this year.

Rex Ryan went to two consecutive AFC Championship games by relying on a strong rushing attack, and Greg Roman’s run-heavy offense took the 49ers to three Conference Championships and a Super Bowl. Over the four years he spent as the 49ers Offensive Coordinator, his offense averaged 491 rushing attempts and that trend will likely continue in 2015 with LeSean McCoy carrying the load. 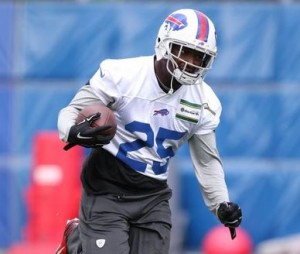 McCoy is currently ranked as the No. 8 RB by most fantasy football outlets, as he’s carried the ball over 300 times in each of the last two seasons, while gaining at least 1,300 yards in three of his last four years. McCoy is effective as a pass catcher out of the backfield, but his value in PPR leagues may be diminished in Roman’s offense, as his running backs caught a total of 133 passes (33.25 per year average) from 2011-2014. To put that number in perspective, Bills’ running backs caught 114 passes in 2014 alone.

Due to the sheer volume of carries McCoy will receive, coupled with an expected improvement by the Bills’ offensive line, Shady McCoy is a safe first-round pick to begin building your team around.

While Sammy Watkins’ rookie season didn’t live up to the expectations that came with a No. 4 overall pick, his 68 catch, 982 yard, 6 touchdown campaign still ranked as the 14th most productive rookie year in NFL history. Watkins played in all 16 games last year, but dealt with nagging rib and hamstring injuries that definitely limited his ability to consistently produce at a high level. 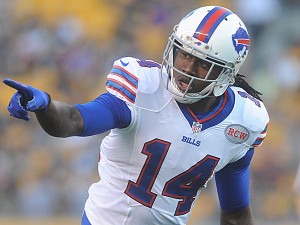 He’s currently being drafted as the No. 19 wide receiver in standard fantasy drafts, which seems about right considering the Bills’ quarterback situation and the style of offense that they’ll look to run in 2015. However, Watkins showed the ability to make incredible catches, create yards after the catch and pick up huge chunks of yardage last year despite the injuries and inconsistent offensive system under Doug Marrone.

Taking Watkins in the fifth-round of your fantasy draft could pay big dividends if he builds upon his rookie campaign and new offensive coordinator Greg Roman can find a way to get him the ball in space on a regular basis.

If you’re in a deep league that awards points for return yardage, Percy Harvin could be a big piece for your team. Last year, Harvin caught 51 passes for 483 yards and a touchdown, adding another 202 yards on 33 carries while playing for the Seahawks and Jets. 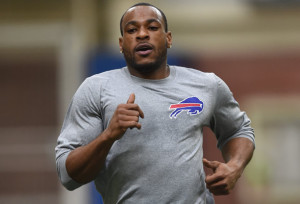 In 2012, Harvin’s last year as a full-time starter, he hauled in 62 passes for 677 yards and three touchdowns, rushing for 96 yards on 22 carries and scored two touchdowns, while averaging 35.3 yards-per-kick return in just nine games with the Minnesota Vikings.

Harvin made it clear that his decision to come to Buffalo was because of Rex Ryan and wide receiver coach Sanjay Lal, who both stated that they want to utilize Harvin as a “true” wideout, rather than the gadget role he’s been used in over the past few years.

In standard leagues, it’d be a gamble to take Harvin at the end of your draft, but if you’re in a deep-roster league with multiple scoring options, he’s an attractive option. 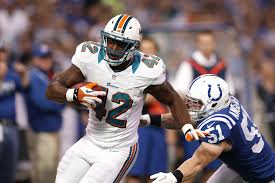 Clay will be an every-down player for the Bills and likely a featured player on offense that should see a significant share of the team’s targets. Considering that he’s going undrafted in most standard fantasy leagues, Clay will present great value as a late-round pick or even on the waiver wire.