The new-look Buffalo Bills concluded their 10 Organized Team Activities (which are voluntary) and thanks to BuffaloBills.com’s Lead Journalist Chris Brown, fans were able to stay up-to-date with the various happenings during the two weeks of practices.

Throughout the next week or so, BillsMafia.com will be taking a look at some of the things that stood out during the OTAs which will hopefully give fans some ideas of personnel groupings, emerging players and scheme installation for July 28, when training camp rolls around.

Since the hiring of new Buffalo Bills defensive coordinator Mike Pettine, the terms “versatile,” “multiple,” and “aggressive” have been a constant, so I decided to look at how he utilized his first line of defense in various situations to see just how versatile and multiple he can be.

While this piece is based on what Pettine utilized under New York Jets’ head coach Rex Ryan’s tutelage, the Bills will obviously run a scheme very similar to that of the 2005-2007 Baltimore Ravens and the 2008-2012 New York Jets. Both defenses are based on 3-4 principles, but both are based on versatility; the ability to show one coverage pre-snap, and quickly shift to another coverage when the play begins.

Before getting into different play calls, we’ll talk about the style of the “3-4” defense Pettine has experience in coaching.

During his tenure with the Ravens, they ran a 4-3 “Under” scheme; contrary to the common belief that they operate out of a 3-4. The main difference between a standard 3-4 and a 4-3 “Under” front is that an “outside linebacker,” in Baltimore’s case, Terrell Suggs, would line up as a stand-up defensive end. 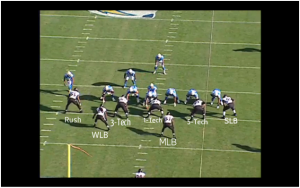 This variation has become more and more prevalent in the National Football League among teams that are viewed as 3-4 defenses. The rush outside linebacker’s responsibility is still the same: rush the passer or set the edge against the run; however, he just lines up on the line of scrimmage, giving the additional three larger “3-4” defensive linemen a seemingly competitive advantage over the offensive line.

With the Jets, Ryan and Pettine still used concepts of the 4-3 “Under” front, but also incorporated more one-gapping into their scheme.

One-gap 3-4 defenses are becoming more customary, due to the attacking nature of the scheme. Instead of the “old-school” 3-4, in which the three down-linemen’s responsibilities were to simply occupy two gaps, or strictly take on offensive linemen, one gapping allows for more aggressiveness on defense.

By taking these big, strong athletes and allowing them to attack just one gap instead of two, defenses have the opportunity to create more pressure against opposing quarterbacks.

However, we can see here with this “three man” front, it is basically the same style of play. 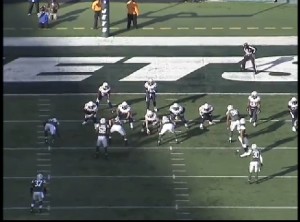 Where Do The Bills Fit In?

Obviously Mario Williams is the lynchpin of the Bills’ defense. He signed a lucrative contract last offseason and has been one of the premier pass rushers in the National Football League ever since he was the No. 1 overall pick in the 2006 NFL draft.

Williams’ has more experience playing in a 4-3 defense, but a switch to Pettine’s “hybrid” scheme shouldn’t be too difficult for him to master. Like Suggs did in Baltimore, Williams’ primary responsibility will be setting the edge in run support and rushing the quarterback in passing situations.

Marcell Dareus was selected with the No. 3 overall pick in the 2011 NFL draft and has the versatility that Pettine covets, as he has the ability to be effective as a 4-3 defensive tackle at both the one and three technique, and as a defensive end in a 3-4 front as a three-or-five technique defensive end.

Alan Branch and Kyle Williams also bring questions to the table regarding the new-look defense. Kyle Williams is arguably the best defensive lineman on the Bills’ roster, but he’s regarded as undersized for the nose tackle position.

However, with one-gap schemes relying on a defensive lineman’s athleticism over bulk, Williams could be productive at both nose tackle and defensive end.

Alan Branch is probably best suited for nose tackle, as the 6’6” 325 pounder has the prototypical size you look for at the position. However, when with the Ravens, Coach Pettine used Haloti Ngata, a player of similar stature at defensive end and it has worked out nicely.

Coach Pettine will be calling plays for the first time in his professional coaching career this season, but he’s worked and learned with some of the best defenses in the National Football League, and all of them have been because of the strong play by quality defensive lines that can attack the quarterback.

Bills fans shouldn’t expect anything else.